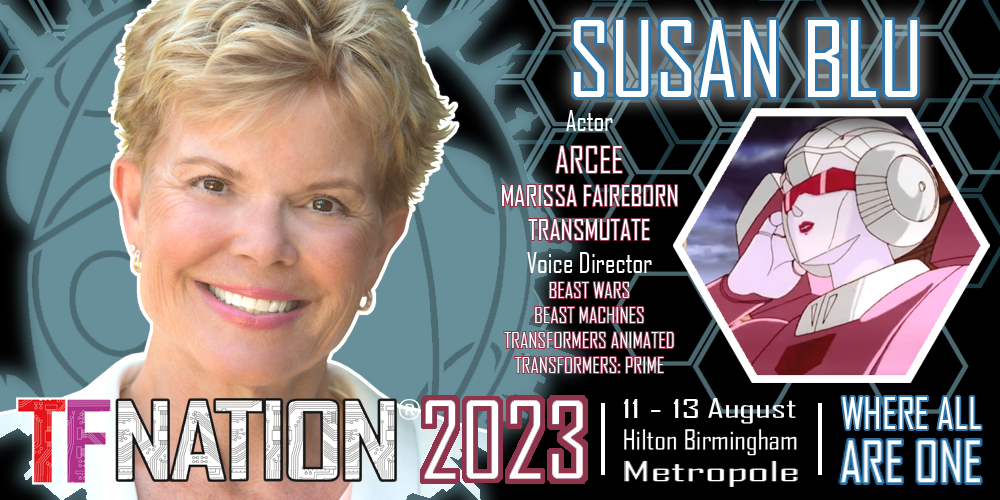 We're delighted to announce renowned voice actor and director Susan Blu will be joining us at TFNation 2023 for her first ever UK convention appearance!

Susan first became known to Transformers fans when she was cast as the forceful female Autobot, Arcee, in 1986's The Transformers: The Movie. She would continue to portray the character in seasons three and four of the original cartoon, as well as voicing numerous other characters, most notably Earth Defence Command Officer Marissa Faireborn. Susan would return to the role of Arcee after 21 years for the fan-favourite series, Transformers: Animated.

Though TFNationals will remember her most fondly as Arcee, Susan is an accomplished actor with many memorable roles under her belt, including Stormer and Lindsay Pierce from Jem, Galadria from Visionaries, Buttons from My Little Pony and Granny Smurf from The Smurfs! In the world of the Cybertronians her additional roles include Transmutate from Beast Wars and Flareup from Transformers: Animated. If you're made of sterner stuff, you can see her on screen in Friday the 13th Part VII: The New Blood!

Acting, however, was only the start of Susan's incredibly successful career. Away from the microphone (but not too far away!) she progressed to numerous roles including Voice Director, Dialogue Director and Casting Director on well-known shows such as Extreme Ghostbusters and the 1987 and 2003 Teenage Mutant Ninja Turtles series.

Following her time on the Sunbow produced Transformers cartoon, Susan went on to work as Voice Director on Beast Wars, Beast Machines and season one of Transformers: Prime. She also worked as Casting Director on Transformers: Animated. If you're a Transformers fan, you've almost certainly enjoyed Susan's incredible contributions over several decades.

Susan is excited to meet all of you and we know you'll give her an incredibly warm TFNation welcome!

(Please note: Susan Blu, like all guests, appears at TFNation strictly subject to professional commitments, and all advertised guest lists are subject to change without notice. All panel rooms are subject to capacity limits. Terms and Conditions of sale apply on this small world and all others, Cybertron being no exception)

We know meeting Susan Blu at TFNation is a real bucket-list item for many of our attendees, so we're thrilled to be able to bring this opportunity to you.

Susan is incredibly friendly and is excited to attend TFNation and meet as many of you as possible; however, it's important for us to manage the situation correctly as we expect Susan to be one of our most popular guests to date.

With our guest’s comfort, the attendee experience, and event logistics in mind, we've decided the best way to proceed is to provide an additional, optional offering for this special event, which we're calling The Legend Pass. You don't need to buy this for a chance of meeting Susan, but The Legend Pass will enable you to secure a guaranteed slot and some extra goodies to mark the occasion.

The Legend Pass is a new offering for TFNation, so below you'll find a full explanation; we've also written a Legend Pass FAQ and a General TFNation 2023 FAQ which will hopefully answer any questions you may have.  Please read them both carefully to ensure, as Arcee might say… you understand the situation.

(The Legend Pass must be purchased with the corresponding convention day ticket)
Previous
Next
© Copyright TFNation Ltd 2015-2022. All Rights Reserved