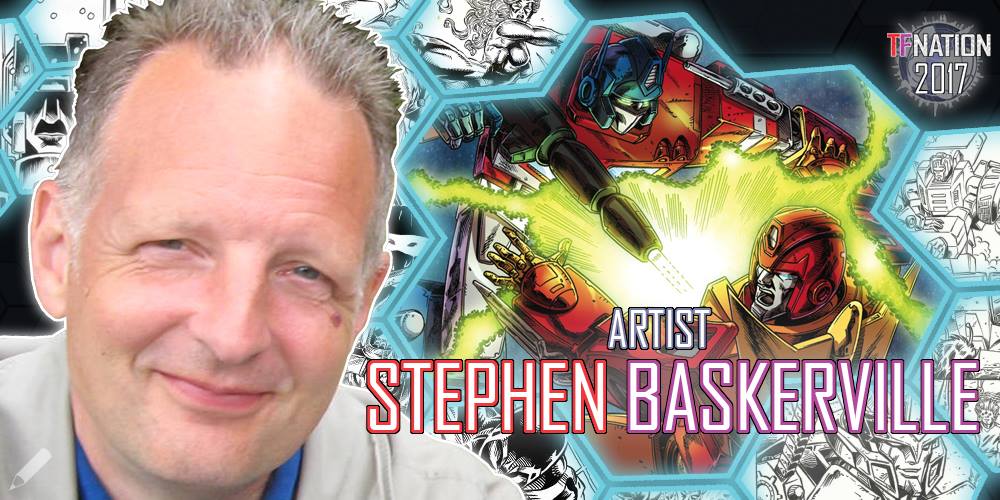 A seasoned comic and concept artist, Stephen has lent his talents to countless projects during his career, with no sign of letting up. Providing comic art for characters as diverse as Spider-man, Judge Dredd, Snake Plissken, various denizens of the Beano-verse, the JSA and Thomas the Tank Engine as well as video game designs for the likes of Reservoir Dogs, Sponge Bob Squarepants, GI Joe,  Doctor Who and  Barbie (sadly not all appearing in the one title, that’s one crossover ripe for the taking).

But it’s for his Transformers work that many of our attendees will both recognise and appreciate Stephen’s art, with a new generation of fans discovering his talents through Hachette’s TRANSFORMERS DEFINITIVE G1 COLLECTION. We look forward to discussion on this release, alongside Fellow TFNation guests Simon Furman, Bob Budiansky and series (re)colourist John-Paul Bove

Working on the British G1 comic, inking for artists including Andrew Wildman, Stephen’s distinct style brought a polished organic edge to many a Cybertronian. After popping back briefly to ink the last edition of the TRANSFORMERS ARMADA comic, a full return to the franchise was announced with the start of IDW’s REGENERATION ONE series, along with the aforementioned Andrew Wildman, writer Simon Furman, artist Guido Guidi and colourist John-Paul Bove, the latter two of whom he continued to collaborate with on the DRIFT: EMPIRE OF STONE miniseries
Examples of Stephen's work;